Looking Back While Moving Forward: The Bricks of Hearth 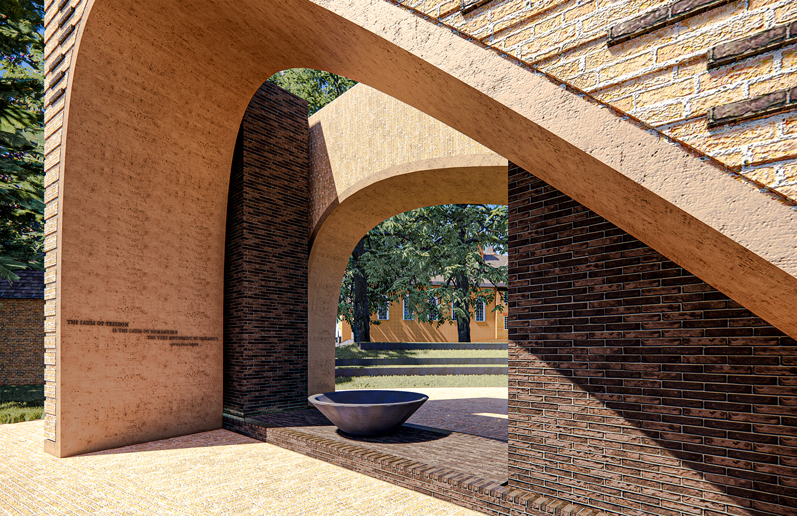 Looking Back While Moving Forward: The Bricks of Hearth

By Dr. Sarah Thomas, Associate Director, The Lemon Project: A Journey of Reconciliation

The dedication of Hearth: Memorial to the Enslaved is on Saturday, May 7, at 2 p.m. We are excited about this monumental occasion and look forward to introducing Hearth to you all.

Thanks to the efforts of the Lemon Project Committee on Memorialization (LPCOM), led by Dr. Jody Allen, the Memorial Building Committee, co-chaired by Dr. Chon Glover, many William & Mary staff, faculty, and students, the architectural firm Baskervill, and the construction company Kjellstrom & Lee, and many, many others, Hearth: Memorial to the Enslaved is nearing completion.

The bricks of Hearth: Memorial to the Enslaved, and the bricks near Hearth tell stories about William & Mary’s past, present, and future.

As you approach Hearth, you’ll notice the darker granite bricks. Many of those granite blocks have names and dates on them. These are the names of enslaved people who were owned or rented by William & Mary or owned by people (Presidents, Board of Visitors members, Faculty, Staff, Students) during their time at the university. Many granite blocks are also engraved with the word “Unknown” and a date; some are engraved with “Unknown,” an occupation, and a date. In those cases, we had glimpses of enslaved people in archival records, but those keeping the records did not include their names. Some granite blocks have no names, known or unknown, or dates. When the Lemon Project team finds more enslaved people associated with William & Mary in the records (and we will!), their names will be engraved on those granite blocks.

You will also notice a small section of six bricks near the Hearth’s base. In contrast with the darker section of interior bricks near Hearth’s center, these bricks are framed and look old. They are! These are historic bricks, found by a team led by Dr. Susan Kern, then Executive Director of Historic Campus, in the summer of 2019. During a project to widen the brick pathway to the Wren Building, workers discovered an early 18th-century drain. The drain’s access point was unknown prior to June 12, 2019. Archaeologists Nick Luccketti ’71, Andy Edwards ’71, and William & Mary Center for Archaeological Research staff uncovered this drain and were able to view its interior. Enslaved people constructed this vaulted drain, accomplishing brickwork that required both skills and knowledge. Enslaved people also made the bricks. It is only fitting that historic bricks from this early 18th-century drain are forever part of Hearth. We can get a glimpse into the lives and labor of enslaved people in early 18th-century William & Mary through the drain bricks.

Lastly, you have probably noticed that a brick wall surrounds much of the oldest part of campus. This wall was constructed in the 1920s and 1930s during the height of the Jim Crow era. Many African Americans who live in Williamsburg and the surrounding areas view this wall as a barrier between them and William & Mary. The Lemon Project team works to tear down physical walls (like this one) and walls in people’s minds while we build bridges between William & Mary and African American communities. Hearth: Memorial to the Enslaved interrupts this brick wall, and during the groundbreaking, President Rowe, President Emeritus Reveley, and Robert Francis Engs Director of the Lemon Project Jody Allen tore down a section of the 1930s brick wall. This broken-through wall represents the Lemon Project’s work to build bridges and repair relationships through reconciliation and healing.

We can arrive at a more complete history of William & Mary. One way to do this is to explore the bricks in and around Hearth: Memorial to the Enslaved. Join us as we use these bricks to tell stories about people of the university’s past, present, and future.